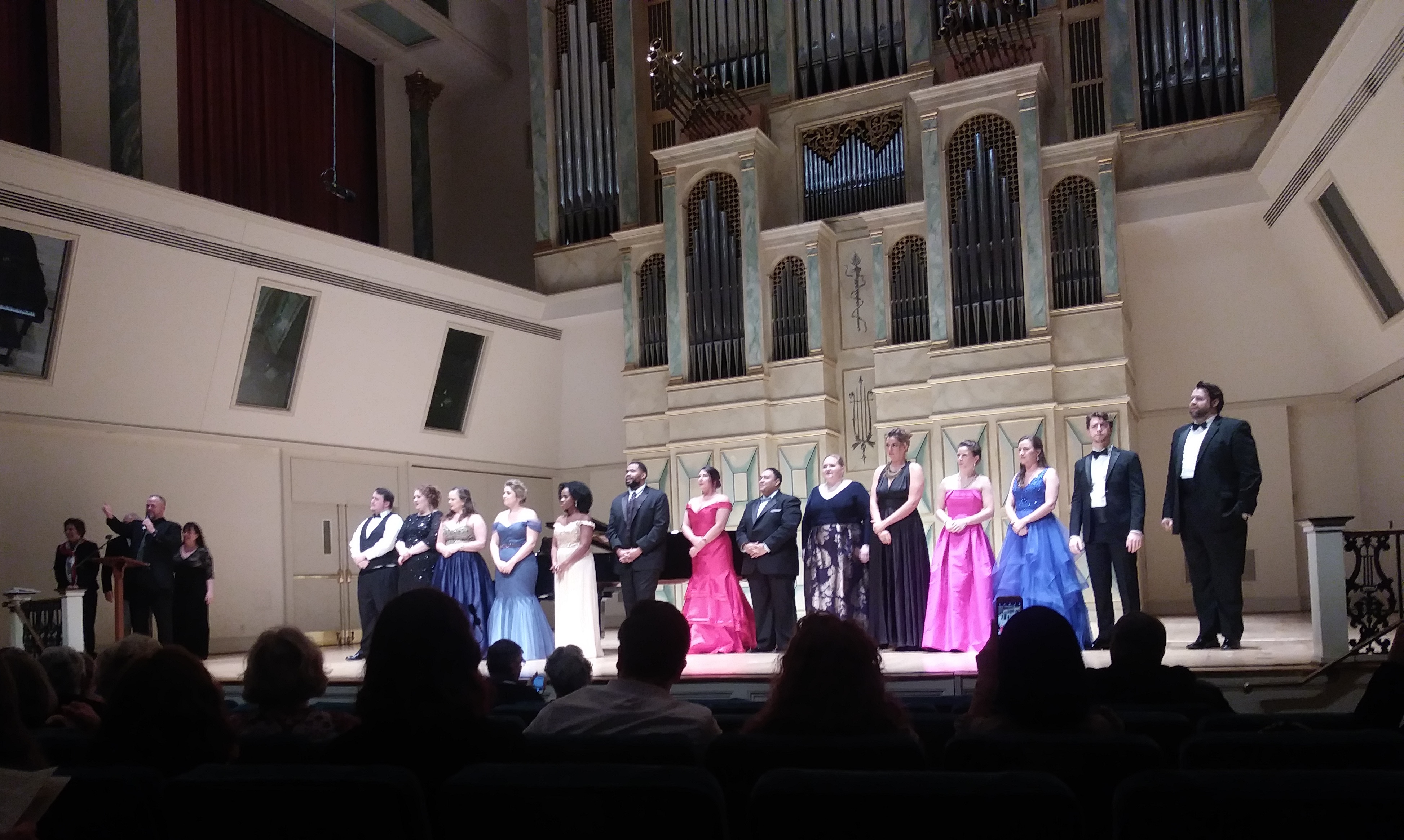 The 14 competitors at the Metropolitan Opera National Council’s Southeast Region Competition look on as the results are announced.

Yesterday, 14 young men and women gathered on the stage of Spivey Hall at Clayton State University. Their purpose? To discover which of them, by adjudicated vocal performance, would continue on to New York City for the semi-final round of the Metropolitan Opera’s National Council auditions.

Every year, the Metropolitan Opera National Council hosts a series of tiered auditions: district, regional, semi-final, and finals, the latter two of which are held in New York City. The ultimate purpose of the auditions is to determine a winner who receives a contract to sing at the Met. Secondarily, the semi-final and final rounds serve as a sort of “audition of auditions”, with numerous directors and artist managers attending. In general, the audition series highlights some of the most talented young opera singers in the country and endorses their achievements at different stages in their journey.

The fourteen singers who took the stage in Morrow, Georgia yesterday were all finalists from their respective district stages: Georgia, North Carolina, South Carolina, and the East/Middle Tennessee districts. (This year’s Western Tennessee district auditions was cancelled due to storms.) At each step, prizes are awarded, and a select number of candidates forwarded to the next audition tier.

One of the challenges at the regional stage is selecting a singer not just for their skill, but also on the basis of who the judges believe will succeed in the hyper-competitive environment of the semi-final and final stages. It’s a tricky business, especially when singers have less common contralto and countertenor voices, for whom few parts are typically available. Browse the list of those who made it to the final round, and it’s practically a “who’s who” of major opera houses. Small wonder that singers travel great distances at their own expense to compete. (Those who reach the semi-final and final stages have their expenses paid by the Met, which also provides coaching from its own artistic staff for the final rounds.)

The Contestants and What They Sang (in Order of Appearance)

The singer-competitors prepare a set of five arias of their selection, but during the actual audition can only select the piece that they first sing. The judges then select the second piece, usually in a contrasting style or period, and on rare occasions may select a third (this was not the case on Sunday). At the end of the auditions, a recital and Q&A session with Brian Vu (North Carolina’s state winner from 2016 and a National Finalist that year) took place as the judges deliberated. Vu was accompanied by Carol Anderson of Utah Opera, who also accompanied each of the singers during the competition. (The competitors have the option of providing their own accompanist at their own expense.)

The three judges deliberating during Vu’s performance were Andrew Wentzel, the Administrator of Knoxville Opera and a professor at the University of Tennessee; Melissa Wegner, the Deputy Director of the Metropolitan Opera National Council; and Christopher McBeth, the artistic director of Utah Opera. Following the end of Vu and Anderson’s program, they emerged to render their verdicts:

The semi-finals round takes place April 22 in New York City, followed by the finals on April 29, which culminate in the famous Grand Finals Concert after a week of coaching with Metropolitan Opera staff.