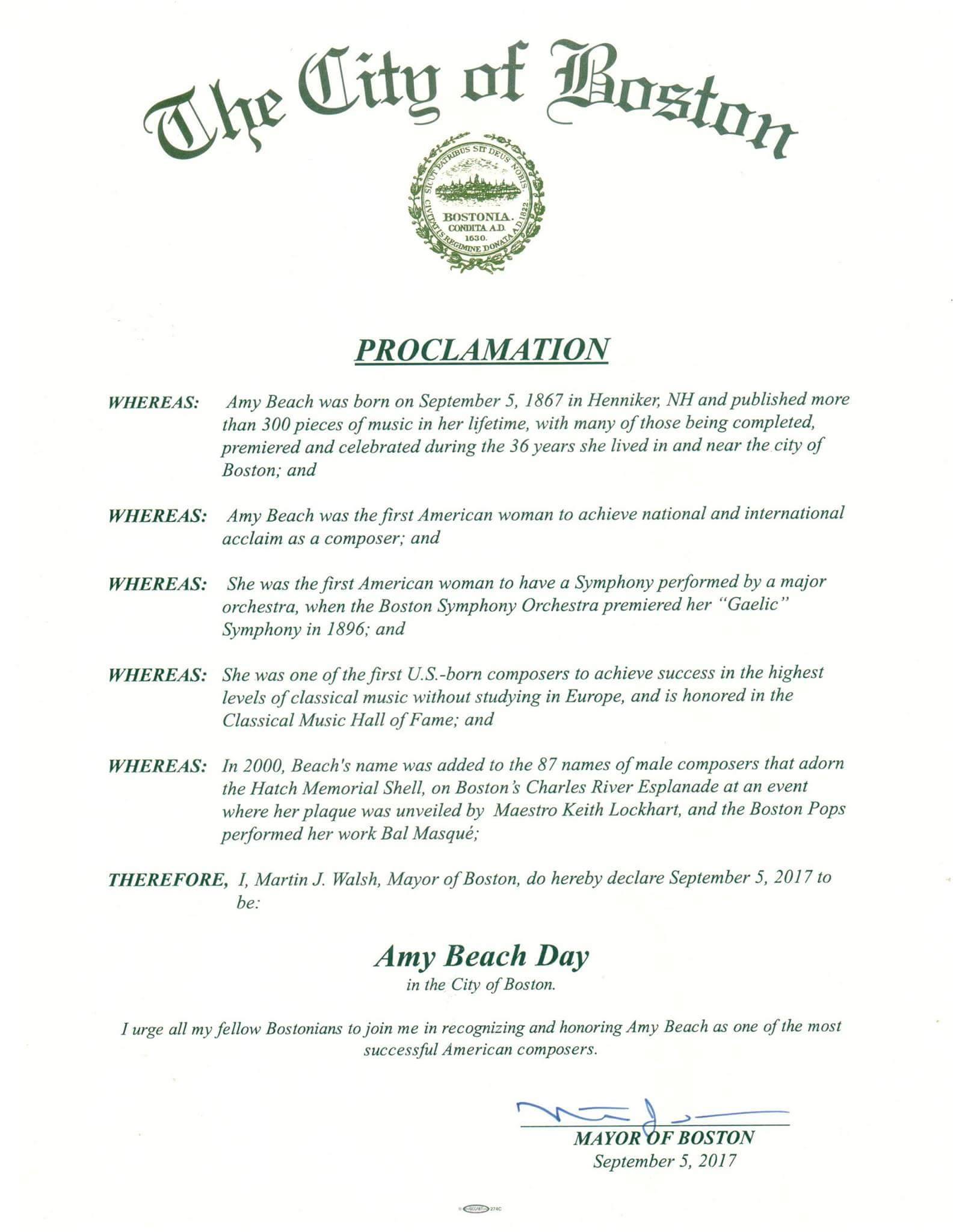 The City of Boston has declared today, September 5, 2017, as Amy Beach Day.

Amy Marcy Cheney Beach (September 5, 1867–December 27, 1944) was an American composer and concert pianist. She was the first American woman known to have composed a symphony and the first to have one performed by a major symphony orchestra. The Boston Symphony Orchestra premiered her Gaelic Symphony in 1896.

Born Amy Marcy Cheney, she was largely self-taught as a composer. She studied harmony and counterpoint for just one year when she was 14 years’ old, studying with Junius W. Hill. Thereafter, she developed her craft through careful study of European treatises on composition, fugue, counterpoint, and orchestration. When translations were not available, she made her own – in many cases decades before commercial translations were printed.

Her concert debut came at the age of 16, a debut that included playing the solo piano part in Moscheles’s Piano Concerto No. 3 in G minor. When she married the surgeon Dr. Henry Beach two years later, some of the specific conditions of their marriage included that she not teach piano lessons (an activity often associated with middle-class women of musical ability), perform in concert no more than twice per year, and focus her musical energies on composition.

The compositional focus quickly drew fruit: in 1892, her Mass in E-flat Major was premiered by the Handel and Haydn Society, one of the country’s pre-eminent musical ensembles. Her BSO compositional debut with the Gaelic Symphony followed four years later, and with the same ensemble’s premiere of her piano concerto (in which she herself performed as the soloist) in 1900, her reputation as one of America’s greatest composers was cemented.

The restriction on her concert appearances evaporated when Dr. Beach died in 1910; after a lengthy mourning period, Amy Beach embarked on a multi-year tour of Europe that turned into a concert tour. Her sheet music regularly sold out in Germany and she played both her own music and Romantic standards in concert appearances across the continent. After returning to the United States following the outbreak of World War 1, the royalties from a single song, Ecstasy, sufficed for her to purchase a vacation cottage in Cape Cod.

In the 1920s, Amy Beach was a regular presence as a Fellow at the MacDowell artist colony, where she composed and interacted with a who’s-who of other American composers. She also traveled as a speaker, served as president of the Board of Councilors for the New England Conservatory of Music, and patronized many young musicians. At her death, she left one of the most prolific bodies of music by any American composer, including an opera, dozens of choral pieces, and dozens of works for solo voice.