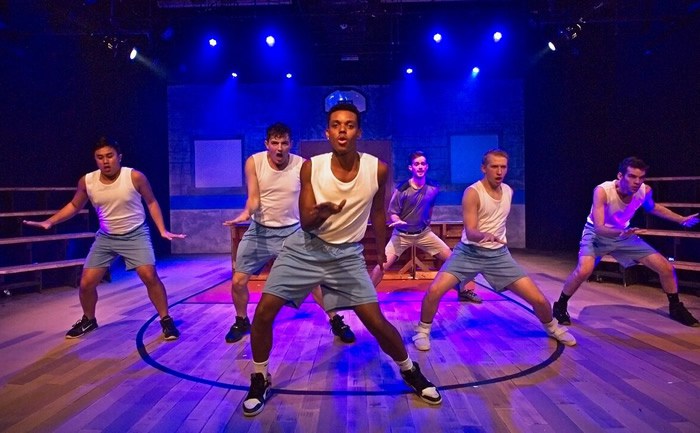 If you like your Greek theatre topical, up-to-date and bawdy – and sung – Red Branch Theatre Company’s Lysistrata Jones is just what the doctor ordered. This 2011 musical by playwright Douglas Carter Beane and composer-lyricist Lewis Flynn is presented with aplomb, spunk and twerking.

Yes, twerking. The song “No More Givin’ It Up” is hard to forget for that particular piece of choreography – but as a throwdown piece the music and the acting are pretty memorable, too. This is not your mother’s Greek tragedy.

This is not your mother’s Greek tragedy.

Both the musical and this staging show a strong cultural stamp of the rise of a cappella groups and a few TV and film franchises. It’s not unlike watching an episode of Glee or a scene from Pitch Perfect, or even Step it Up or Battle of the Year. This isn’t bad – a lot of people would love to go to a school with all things going on in this production. It’s also very much more filling than Bring It On, which will win no awards for plot. Hailey Ibberson and Taylor Witt shine in their protagonist-sidekick duo, with a powerful, energetic belt on Ibberson’s side and a charming Everyman awkwardness in Witt’s portrayal of the sidekick.

Stephanie Lynn Williams’ direction and Brandon Glass’ choreography keep this show moving. There are a lot of moments that are fun and a lot that are poignant.