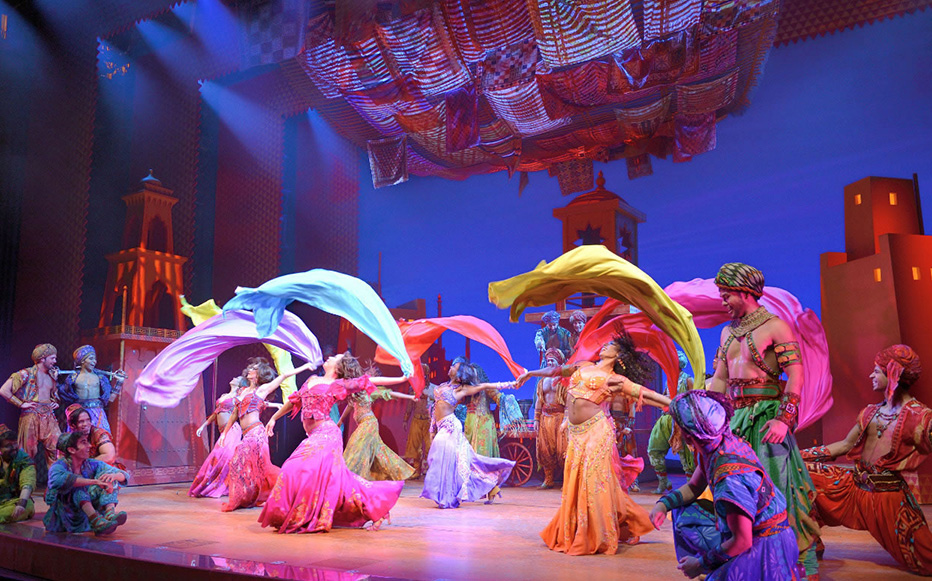 The Broadway cast of Aladdin. Photo by Deen Van Meer.

Trading on childhood movie nostalgia is dangerous business in the theatre. Make too many changes and you hear “You ruined my childhood!” Make too few and you’re unfavorably compared to what you tried to adapt. Disney’s Aladdin, now playing on Broadway, bucks the trend by doing things with stage effects that make you gasp, wonder, and generally enjoy the same types of thrills for very different reasons. The current cast is finely tuned, incredibly athletic, and simply fun to watch.

This stage adaptation of the 1992 Disney film, like most of the franchise, features a score by Alan Menken and lyrics by Howard Ashman. It is in some ways more of a Menken-Ashman creation than the animated film, as several songs cut from the film find their place here. These are mostly well-used; aside from the fact that the real highlight of the show is the Cave of Wonders/”Friend Like Me” sequence at the end of Act I, the show never feels like it drags. The book for this aged-up version of the tale was written by Chad Beguelin, who will probably be much more fondly remembered for this than The Wedding Singer.

The current cast features Telly Leung as Aladdin. Much has been made of Leung’s Asian heritage in the casting decision (Leung is Chinese), none of which is actually of any concern when watching this show. Why? Because Leung is a talented actor with powerful stage presence, who carries the role through the arc of the show. He is slightly overshadowed in some parts by Isabelle McCalla’s Jasmine, which doesn’t feel out of character with the more adult direction of this show. Everyone in the cast takes a back seat to Major Attaway’s high octane Genie, whose charisma and zest and frothing energy ramp up the show’s energy level again and again.

As the primary antagonist, Jonathan Freeman (Jafar) doesn’t have as much to do as you might expect, but he certainly gives a memorable performance – not the least because he is the voice of the original animated film’s Jafar. That’s one for the kids – they will remember that villain and probably get the film and stage actions mixed up as a result.

Something that this show doesn’t do a lot of is give much time to supporting characters. Not that they’d have much of a chance – there are so many costume changes, dance breaks, and high kicks to be found that there’s not a slow moment. Watching this show is not just reliving your childhood – it’s a bonafide attraction in its own right. Highly recommended.