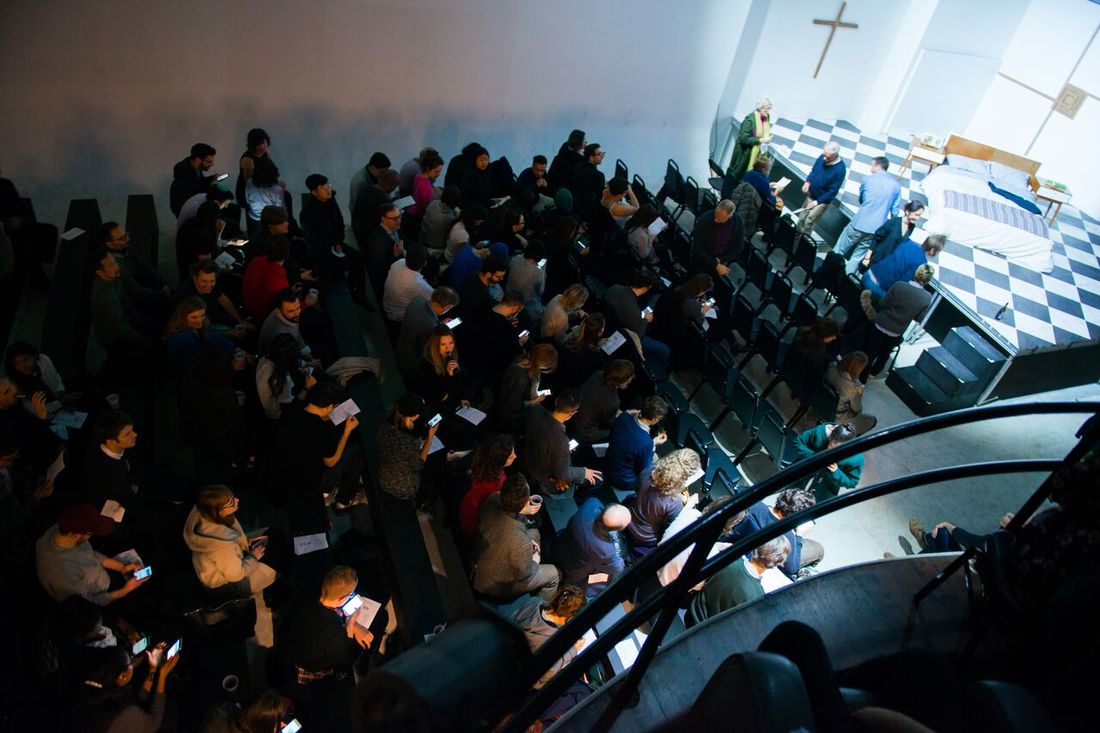 A space between stairs and the wall became a performing space for Loft Opera’s production of Otello. Photo by Alejandro Simonetti.

Grand opera is one of the most expensive live art forms in the world – the annual budget at the Metropolitan Opera now regularly exceeding $300 million annually. Although ticket prices are not necessarily expensive compared to superstar rock concerts and luxury seats at sporting events, the economics of grand opera and perceived high cost of attendance have sent more than one company into shutdown. With Millennials being increasingly price conscious and eschewing subscriptions, business as usual is anything but a safe bet.

Here are three innovative opera companies in the United States that march to a different drummer and are shaking up the opera industry:

Founded in 2013, this New York City-based organization has made waves by ditching the elaborate sets and large theatres that many people associate with opera for up-close-and-personal performances in improvised and repurposed spaces. LoftOpera operates with a mandate to make opera affordable, accessible, and interesting, ditching elaborate trappings in favor of $30 tickets so close to the action that you could practically reach out and touch the cast.

Audiences packed the 1896 Warehouse in Bushwick to see LoftOpera’s 2014 production of La Bohème, stripped down to the simplest of sets and furniture. That time they got seats – but even when LoftOpera audiences were cramming their butts on bare floors in the loft spaces that gave the company its name, they still came in droves. Three-quarters of the show’s audiences are under 44 years old or younger, and three-fifths are members of the coveted under 34 demographic.

This Los Angeles-based company bills itself with four words: “Accessible. Affordable. Entertaining. Opera.” Pacific Opera Project is the new kid on the block compared to its neighbor LA Opera, having been founded in 2011. POP’s way of doing operas couldn’t be more different than the classic “big theatre filled with giant sets” approach. Its seasons are filled with classic operas turned on their heads, like the forthcoming revival of its La Bohème AKA “The Hipsters”. In this update of the classic Puccini opera, an actual dining club plays host to the action, with each audience member seated at a table with a bottle of wine and appetizers.

As with the other companies on the list, POP’s mission statements emphasize building new opera audiences and launching the careers of opera makers. The 6-year-old company has already delivered on both, in part due to the runaway success of its POP-Up productions – “parties where an opera happens to be playing.” Nor does it limit itself to classics – its current season includes the world premiere of Brooke deRosa’s The Monkey’s Paw.

Most Pacific Opera Project performances “break” the rules of opera somehow. A recent production of Lucia di Lammermoor was set in an actual cemetery, physically transporting audiences to a dramatic outdoor hillscape in Forest Lawn Memorial Park – and mentally transporting them to rural Scotland better than any indoor set possibly could.

Following a 250-year-old business and programming model is usually a quick recipe for bankruptcy today. Minnesota-based Really Spicy Opera is the exception that proves the rule: the company (founded in 2006) is patterned after a set of nimble, traveling opera companies that set out from Paris to tour the Francophone world during the 18th century. Like those companies, RSO brings the latest and greatest hits from the big city to its audiences: world premiere runs of new operas, plus a mix of new plays and musicals using the same singer-actors.

All the world’s a stage, but on RSO’s stages, contemporary themes and stories are the rule. The mix has caught fire with audiences drawn by powerful, emotionally moving dramas and sidesplitting comedies. It’s also socially conscious – the company has committed to three seasons featuring female protagonists and female writers, seeking to address long-running inequities in the operatic repertoire. RSO’s motto is “Cultivating drama that burns and music that sates” and its marketing materials are filled with food-related puns.

Like the globetrotting troupes that inspired it, Really Spicy Opera rarely hangs its shoes up for too long. 2017 found the company selling out intimate jewelbox venues in Minnesota before heading off to Canada, Florida, Hawaii and Tennessee. Millenials and first-time operagoers make up most of its audience on the road; three quarters of its hometown audiences are under 35. It is the only opera company in Minnesota with a primary focus on presenting new works.

—
Jessica Smith and Jeremy Stratford contributed to this article.